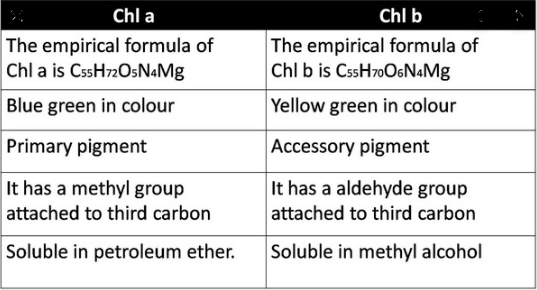 Chlorophyll is a green pigment. It is present in all photosynthetic organisms. It is insoluble in water but it is soluble in organic solvents like carbon tetra chloride (CCl4), alcohol etc.

3. Chlorophyll a is the most abundant and most important photosynthetic pigment. It takes part directly in the light reaction of the photosynthesis.

It converts solar energy in to chemical energy. It is present in all photosynthetic organisms but it is absent in the photosynthetic bacteria. Chlorophyll a has several forms. These forms differ slightly in their red absorbing peaks (limits).

For example, they may absorb wave length of red colour of 670, 680, 690, and 700 nm. Chlorophyll b is present with chlorophyll a in all green plants and green algae.

What is Adenosine Triphosphate ATP? | Importance & Role of Mitochondria

What are the 2 major types of Nutrition and their Sources with Examples?