The Basic Difference Between Pure Substance And Mixture is that Pure Substances are always composed of the same kind of particles and are homogeneous in nature with respect of origin while mixtures are variably composed having components that retain their characteristic properties.

Difference Between Pure Substance And Mixture in Tabular Form

everything present on this earth is known as a matter which can be defined as anything which occupies mass and space is called “matter”. the matter is consists of three fundamental states i.e., solid, liquid, and gas.

apart from the three states of matter, we can classify matter in pure substances and mixtures. substances always have a specified and definite composition that cannot be further subdivided into any state or form.

when we talk about pure substances, they can be divided into elements and compounds. these substances make mixtures. i.e., two or more substances can make up a mixture.

like substances, there are two further types of mixtures such as homogenous mixtures and heterogeneous mixtures. anyways, these are not relevant topics here. we will explain simply the difference between pure substances and mixtures.

What is Pure Substance?

those substances which are made with a single type of atoms or contain only one type of particles having fixed and constant structures are called pure substances. aluminum, iron, silver, and gold are some common examples of pure substances.

a pure substance can be made with only a single solely substance and cannot be isolated into different substances. 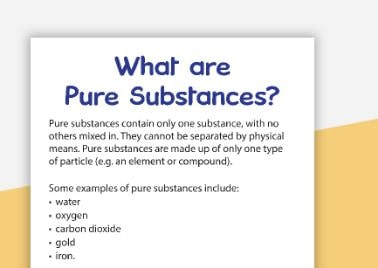 they have definite physical and chemical properties. pure substances are grouped into two major categories: compound and elements.

elements are those pure substances which contain a single type of atoms which cannot be divided or transform into simpler form or substances by any physical or chemical mode.

for example, if Gold is breaking down it will make Gold again. elements can be metals, no-metals, and metalloids (metalloid is a mixture of metal and non-metal).

like elements, compounds are also pure substances with a combination of two or more elements together. they are combined chemically by a fixed proportion.

in contrast, compounds can be broken down by some chemical methods. we can take water as a compound example as water is a compound of two elements hydrogen and oxygen in a fixed proportion 2:1.

Some Examples of Pure Substances

all the elements are said to be compounds approximately. gold, diamond, copper, oxygen, baking soda chlorine, Compounds such as water, salt or crystals, etc. are some common examples of pure substances.

What is a Mixture?

the mixture can be isolated into other substances. they have different chemical and physical properties that depend 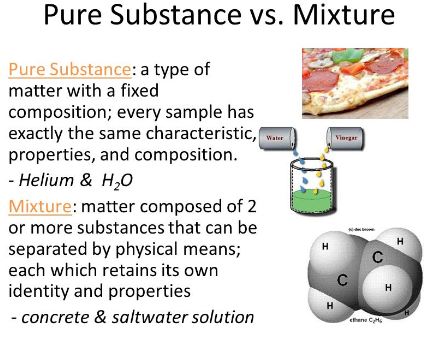 on the pure substance proportions present in the mixture. mixtures are further grouped into two types i.e., Homogeneous and heterogeneous mixtures.

homogeneous mixtures are solutions having a uniform or unvarying in the configuration in composition. they may contain two or more distinct elements joined together chemically. soda water, a mixture of salt, lemonade are some common examples of a homogeneous mixture.

Conclusion on Difference Between Pure Substance And Mixture:

Pure Substances can be categorized into Compounds and Elements. mixtures are made up of different compounds by some physical methods that can be separated into their constituent elements or compounds.

Difference Between Ester And Ether

Difference Between Evaporation and Distillation