Layers of Atmosphere: The atmosphere consists of four spheres (layers) extending from the surface of the earth 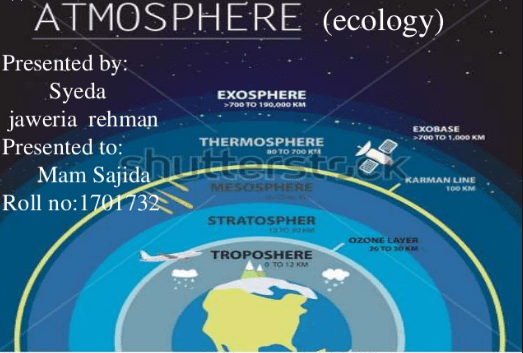 upwards. The concentration of the components gases decreases gradually upwards, which results in a gradual decrease in pressure. But the temperature of the atmosphere does not change in a gradual way. It varies in a complex way.

in this layer, the temperature rises up to 20C. Beyond the stratosphere lies the mesosphere, covering up to 85 km. in this region again temperature decreases down to -930C. Beyond 85 km lies the thermosphere, in which temperature goes on increasing upwards.

Reasons for variations of temperature and other phenomena in troposphere and stratosphere:

The major constituents of the troposphere are nitrogen and oxygen gases. These two gases comprise 99% of the volume of the earth’s atmosphere.

Although the concentration of carbon dioxide and water vapors is negligible in the atmosphere, yet they play a significant role in maintaining the temperature of the atmosphere. Both of these gases allow visible light to pass through but absorbs infrared radiations emitted by the earth’s surface.

Therefore, these gases absorb much of the outgoing radiation and warm the atmosphere. As the concentration of gases decreases gradually with the increase of altitude, correspondingly temperature also decreases at the rate of 60C per kilometer.

This is the region where all whether occur. Almost all aircraft fly in this region.

Thus, the upper layer absorbs high energy ultraviolet radiations from the sun, it breaks down into monoatomic (O) and diatomic oxygen (O2).

Internal Structure of a Leaf