Molluscs are a broad phylum of invertebrate animals having a soft body of bilateral symmetry. they have muscular foot covered by a their bodies protected by a shell or calcium-based exoskeleton except octopuses.  All Molluscs are considered aquatic animals, having more than 100,000 species.

they are said to be the second-largest phylum in the animal kingdom after the arthropods.

This is a Complete Guide About Phylum Mollusca Characteristics.

in This article You’ll Learn: 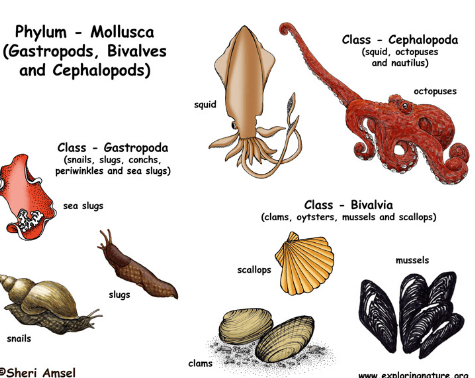 What is Phylum Mollusca?

Mollusca is considered to the second-largest phylum of animals after Arthropoda and are invertebrates. they have foot along with ventricle structure for locomotion. An open circulatory system is present in some molluscs for the blood circulation through vessels and also some have closed circulatory systems to move blood through the body enclosed entirely in blood vessels.

The phylum Mollusca is composed of a variety of organisms. They include slow-moving snails and slugs bivalved (shell with two parts) clams and highly active cephalopods. This phylum has 50,000 living species. It is the second-largest phylum of invertebrates. The giant squid is the largest invertebrate animal.
Molluscs show a great variety of form (structure). But all Molluscs have the same basic structure. They show the following characters:

Heart pumps the blood into these sinuses. They have blue respiratory pigment called haemocyanin.

The Molluscs are divided into three classes. There following major classes:

Most of the Molluscs are beneficial.