The large intestine is composed of a caecum, colon and rectum.

The caecum is a blind sac. It projects from large intestine between ileum and colon. A finger like process arises from the blind of the caecum. It is called appendix. Sometimes food entraps in the appendix.

It is the largest part of the large intestine. It has three parts: an ascending part, a transverse part and a descending part. Colon opens into rectum.

It is the last part of the large intestine. Feces are temporarily stored in the rectum. Finally these feces are removed through anus at internals. Anus is surrounded by two sphincters. The internal is smooth sphincter, while the outer sphincter has stripped muscles. As the rectum fills with feces, it gives rise to defecation reflex. This reflex can be consciously inhibited in adults. But it cannot be controlled in the infants. Gradually, the child learns to bring this reflex under control. 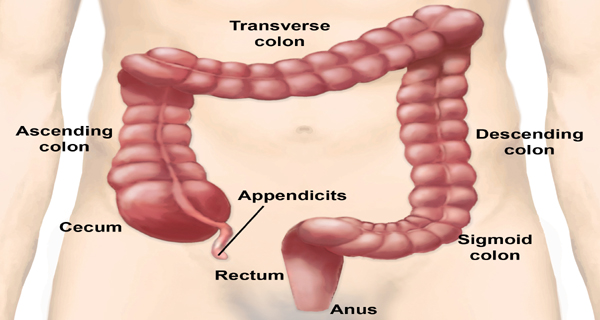 Function of the large intestine

It performs the following functions:

1. Absorption of water and salts

The material that passes from the small intestine to the large intestine has a large amount of water, dissolved salts and undigested material. Most of the water and salts are absorbed into blood. There can be two abnormalities in the absorption of water.

A large population of bacteria lives inside the large intestine. These bacteria synthesize some vitamins especially, vitamin K. This vitamin k is absorbed by the blood and used in the body.

Parts of Small intestine and their Functions