Phylum Coelenterata animals are aquatic and are marine. they are also 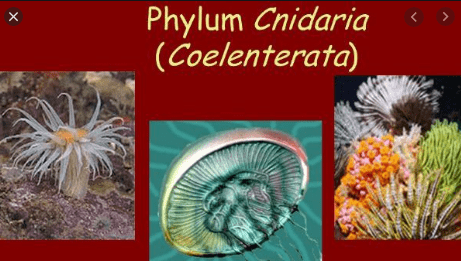 called Cnidarians. they are metazoa and multicellular, diploblastic and radially or biradially symmetrical are some Characteristics of Coelenterata. they are also known as hollowed-bodies animals.

Characteristics of Coelenterata or Cnidaria

Both these generations are diploid e.g. Obelia.

Some of the colonial members have up to five different types of zooids. These zooids performs different functions for the colony, e.g. Physalia (Portuguese man of war).

Examples of Phylum Coelentrata or Cnidaria

So, alternation of generation is absent ¡n it.

“The stony mass of living coelentrates is called corals.”

Certain specialized polyps secrete skeleton and from corals. Their secretions become hard and cover the polyps with stony cups. The polyps can pass out their tentacles form the mouth of the stony cup for feeding. It withdraws the tentacles when it is not feeding.

Coral reefs are present in the coastal water of Florida (USA), West Indies, East Coast of Africa, Australia and island of Coral Sea.